It’s not just what we accomplish that’s impactful, it’s why.

We believe that change happens when we work with a deeper mission in mind. The local leaders in our network are motivated by the “why”—the driving purpose—behind their work too: seeking to honor God as they use business to end poverty.

Alex lives this out everyday.

While he is a business owner and a leader of our local partner Business Partners Myanmar, he also knows first hand how employment opportunities help overcome poverty.

Alex’s father passed away when he was young, leaving him to support his mother and four siblings.

Alex worked various jobs, tirelessly scraping together a living to feed his family and send his siblings to school. The burden of responsibility stole away his own childhood as he sacrificed to create a better life for his family.

Alex began following God when he was sixteen and shortly after landed his first stable job at a hotel. He continued to climb the hotel ladder and eventually became a resort manager. He was now able to provide for his mother and siblings, and even started a family of his own when he married Sharon in 2004.

Though thankful for his career success and financial stability, he had another dream that longed to be fulfilled: to start a business of his own.

Alex prayed for God’s direction and finally received an answer. In 2011, his contract at the resort was up, giving him a shot at his dream. With the help of his wife Sharon, Alex began his own travel business: Myanmar Escapade Travel and Tours Company, Ltd.

Alex and Sharon, along with their two other employees, had a rocky start. Despite their hard work and dedication, they zeroed out their bank account twice in the first two years. In 2013, Alex made a sacrifice to save the company from financial ruin by moving to Nay Pyi Taw to manage a hotel.

Meanwhile, Sharon received assistance and guidance from our local partner, Business Partners Myanmar, in order to recover their business. 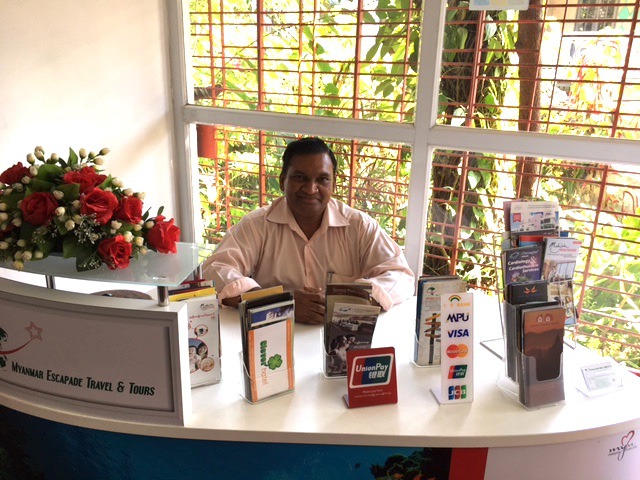 With their help, Sharon got Myanmar Escapade back on its feet. When Alex returned home in 2015, the company was ready to take off again. Today, Alex says Myanmar Escapade is “one of the blessed tour companies among 2,200 other competitors in Myanmar.” Marveling at this, Alex gives all the glory to God for how his business has grown and weathered many challenges.

To reinvest in their community, Alex and Sharon now serve as leaders of Business Partners Myanmar. Together they mentor and train other entrepreneurs to grow businesses that create much-needed jobs–jobs like the one Alex relied on to support his family when he was just 16.

Working with Business Partners Myanmar encompasses the “why?” behind Alex’s work. Because he has witnessed firsthand how one job can lift a whole family out of poverty, he is inspired to help other entrepreneurs build businesses that will create more opportunities—with the dream of ending poverty for good—in Myanmar.