Rockey leads quite the double life. By day, he’s an account manager at a US based multinational cooperation. But by night, an innovative entrepreneur and smartphone app creator—his real passion and dream.

When Rockey came to the Marketplace Revolution 2015 conference in Bangalore, he had a business idea—a smartphone app—with great potential, but he was lacking the financial resource to take the first steps. At the conference, he was introduced to Paris Varghese, an accountant who had heard about Rockey’s business idea and was very impressed. Paris immediately agreed to fund the project, as well as mentor Rockey. 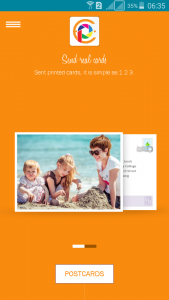 Not long after the conference, Paris and Rockey began working on developing Ezzypics—an app that allows you to take a photo on your phone and send a real customized photo greeting card anywhere in the US, for just 85 cents. Paris worked very closely with Rockey to initiate and develop the business, and within a few months Ezzypics had its first version on the Android platform.

Currently, Ezzypics only sends cards within the United States, but Rockey is hard at work developing plans to expand to other countries and is in the process of connecting with potential partners to further this plan. He is also working on this app for the iOS platform, which will give him even greater exposure.

This is what the Partners Worldwide network is all about: making connections. It is inspiring to see stories like this, of how a connection was made, developed into a business opportunity, and now is evolving into a business model that will enable Rockey to create jobs and be a blessing to many others.