You could say Maria Cecilia is a tortilla expert… she’s been making them for 24 years. Because her parents believed education was only for men, Maria became a tortilla entrepreneur when she was just 7 years old in Guatemala City.

After she got married, Maria decided to start her own tortilla business called La Ventanita. When she first started she had around 30 clients and made a daily income of $20.

After a year of running this business, she moved down the road in Guatemala City and heard about the Vida Nueva Association, a micro-lending organization through The Potter’s House, which is one of Partners Worldwide’s newest local partners in Latin America.

Maria learned about the loans and trainings they offer and began using these resources to improve her business. Maria’s first loan was for $65—“When I received it, I felt like I was a millionaire,” Maria said. 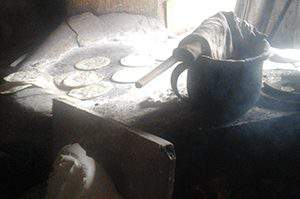 Even with this capital, Maria still faced the problem of the location of her shop, right next to the garbage dump. Ensuring proper hygiene and sanitation was time consuming and she could only serve her tortillas only through a very small window to ensure the shop wasn’t contaminated. This is why she named her business La Ventanita, “little window.”

Luckily after some time, the dump relocated away from Maria’s shop, allowing her to serve customers through more than just a small window.

Maria has since taken out 17 loans, allowing her to purchase new machinery and other supplies necessary for her business. Now, she employs four women, serves around 150 people per day, and brings home a daily income of $105!

The women she employs are also improving their quality of life, bringing in a stable income to support their families and being trained and mentored by Maria.

Through Vida Nueva Association, Maria has also learned how to save her money, which has helped her to purchase and remodel the building she rented for her tortilla business – reaching one of her biggest dreams of home ownership. She was even able to open a new pig-raising business, which has added to her profit.

With such success, Maria has been able to support and provide education for her six children, including her daughters, changing the mindset taught by her parents that only men need an education. Maria is even pursuing education herself and is in the process of finishing 2nd grade through a special program for adults.

Maria’s next move is to expand her business, hire more people, and provide tortillas to big restaurants. This will allow her to continue to send her children to university and provide more employment opportunities for her community.

Perseverance and strong faith helped make Maria’s dreams a reality. As 1 Corinthians 3.6 says, “I planted the seed, Apollos watered it, but God has been making it grow.” Maria thanks God for her success and knows that it is Him who has helped her business grow and who gives her the strength to create a better life for her family.