My home of Trinidad and Tobago (often shortened to just Trinidad) is a twin-island nation in the Caribbean, just off the eastern coast of Venezuela.

Though we’re a small country, we are rich in so many ways; in natural resources, cultural traditions, musical heritage, unique Indo-Caribbean cuisine—and more than anything, our people.

With a diverse population, Trinidad is full of potential. It is my dream, as the leader of the Network of Christians in Business (NCB), to unlock this potential and create economic opportunities across Trinidad.

We’re building on a firm foundation, as Trinidad has made significant economic progress in recent years.

In fact, since 1999 our GDP per capita has increased from around $5,000 to $16,000. However, we still face a poverty rate of 20 percent. At NCB, we’re working to bring that number down and impact communities through the power of ethical business.

Since 2010, Partners Worldwide has come alongside us in this effort. In 2012, they connected us with a team of volunteer mentors from Canada. Among them was Gary Brickell, who owns a sign business.

During the group’s first trip to Trinidad, we visited seven businesses, attended a business conference, and bonded tremendously with the group—and with Gary in particular.

He was full of wisdom regarding business principles and marketing, and most importantly, he shares our passion for transforming lives through business. 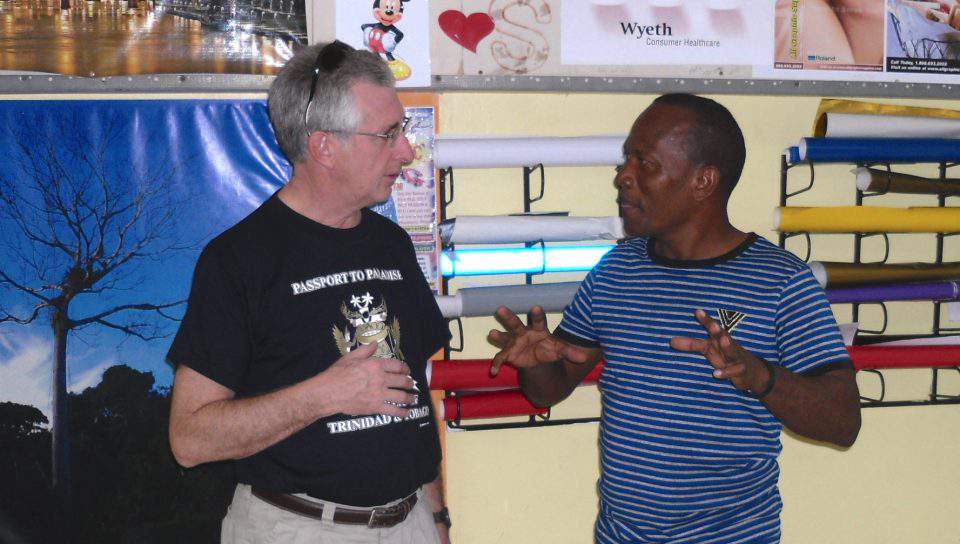 Since that initial trip in 2012, Gary has mentored entrepreneur Serville Castillo (pictured here together). Like Gary, Serville also owns a sign business. As a result of the mentoring, Serville has re-focused his business and is growing it day by day. Serville wants to be like Gary in every respect, and we tease him about that!

Gary returned to Trinidad in November of 2015 with his wife, Mary. It was their 40th wedding anniversary, but they chose to spend it with us. We are still so touched by their special visit.

Together, we visited health-related businesses, since Mary works in the health sector. We also attended a two-day conference, during which Gary shared his perspective on how to operate a kingdom business.

In addition to mentoring Serville, Gary has contributed tremendously to the growth of NCB as a whole.

He has personally mentored me as I lead our team and has provided guidance on how we can strengthen our organization.

While Gary is home in Canada, he continually scans the environment and passes along information on trends in the marketplace. According to Gary, “my being in Canada enables you to look over the hill to see what to expect in your marketplace eventually, and thus prepare for it.”

He recently advised the entrepreneurs in our network to focus on their unique business sector, in order to identify trends and plan ahead. Using Canada as an example, he mentioned how some major retail stores have been closing due to an increase in online shopping.

The insight and forewarning Gary provides are incredibly valuable for the entrepreneurs we serve, allowing them to anticipate changes and adapt accordingly.

We are so grateful for Partners Worldwide and how they have connected us to servant-hearted volunteers like Gary.

As we plan for the future of our partnership together, we hope to continue to uplift and encourage Christian business leaders across Trinidad and Tobago. As we do, our economy will grow, our nation will continue to move forward, and people will be lifted out of poverty for good.