When he was 15, Rony’s life forever changed.

At the time, he thought it was the end. But he realizes now it marked the beginning of a whole new chapter—one by God’s great love and faithfulness.

Growing up in poverty in rural Guatemala, about three hours from Guatemala City, Rony’s life was never easy. His dad left their family when Rony was young, leaving his mother to raise him and his seven older siblings alone. Nevertheless, they managed to get by.

But when Rony was 15, things took a turn for the worst.

His mother got very sick, and in only a week, she passed away. Even though his father was absent, Rony and his siblings got word that he had passed away too.

They became orphans in an instant. Suddenly needing to support themselves, Rony dropped out of high school and got a job as at a nearby restaurant.

After several months of working, Rony found that he missed high school. He looked at his life and was filled with despair. This was not how he thought things would turn out. He always imagined graduating from high school—his family cheering him on—before going on to university or opening a business.

Rony’s older brother Mario also recognized Rony’s need for support. So he hired him on as an assistant at his blacksmith workshop.

They worked side-by-side for three years, and Rony learned the trade of blacksmithing. He still couldn’t return to high school, but things were looking up. He felt hopeful for the first time since his parent’s death.

Until Mario was taken from him, too.

His death, the result of a heart attack, was even more unexpected than his parent’s—and it shook him. First his parents, and now his brother? Why?

Again, Rony was consumed by despair and hopelessness, and this time he had no one to turn to. So, he turned with a laser-sharp focus to work. 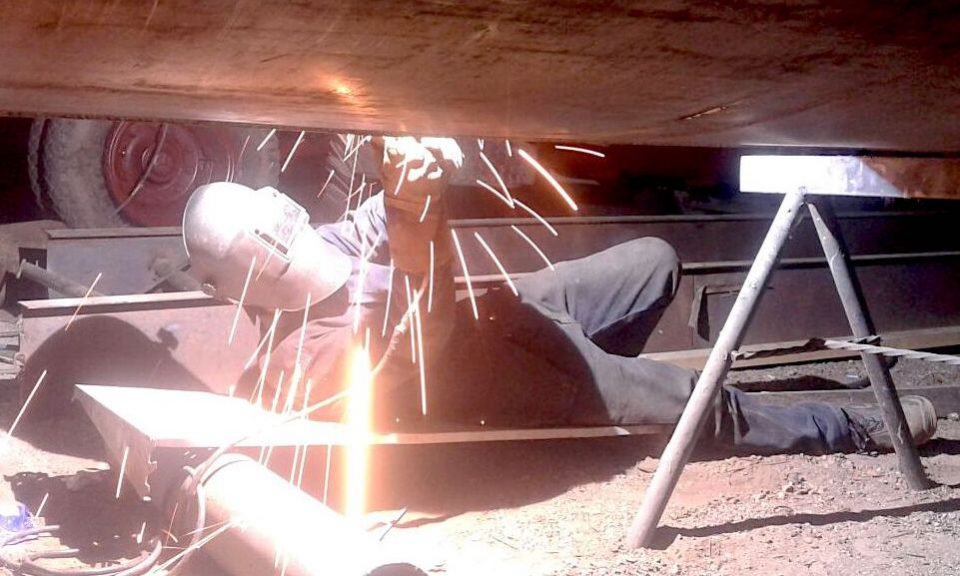 He poured himself into his work at the blacksmith shop and found comfort in it. For the next few years, he continued to refine his craft. With the solace of work as an aid, Rony slowly began to heal from his brother’s loss.

He also found a supportive community at his church and soon met Gladys—his future wife. They got married and began to create a family of their own.

As Rony worked at the blacksmith shop, he remembered his dream of owning his own business.

After a year of thinking about opening a blacksmith shop of his own, he “threw himself in the water” (as we like to say in Guatemala).

In 2003, Rony opened shop in a small, cramped room in his house.

He quickly gained clients, thanks to his fast, efficient work. “My jobs were very well-done and delivered quickly,” he remembers.

But Rony wasn’t satisfied. He had an insatiable desire to learn and grow. And this desire led him back to the classroom.

After years away, he went back and graduated from high school. Then, he went on to study at a vocational training school. After four years of hard work, Rony graduated as an Industrial Welding Technician.

Though he couldn’t have achieved this alone, he acknowledges: “My wife has always motivated me and has been of great help.” 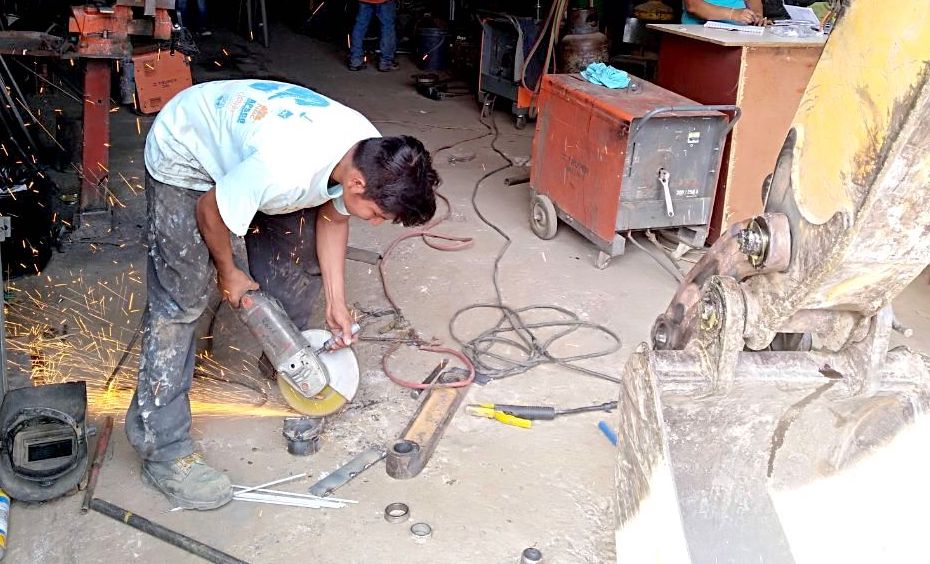 BECOMING A BUSINESSMAN THROUGH TRAINING & MENTORING

While Rony’s studies sharpened his technical skills, he still struggled with basic business management. In fact, his business suffered bankruptcy.

Rony couldn’t believe it. All he had worked for seemed to be slipping through his hands.

That’s when he heard of the Partners Worldwide Business Training. Rony eagerly signed up and was soon blown away. He had never learned this practical information before, especially not from a Biblical perspective.

“The business curriculum and training helped us recover from corporate bankruptcy,” Rony shares.

“Our operations are in order now, and the numbers make sense. A few months ago, we even didn’t know what equipment we had, and our prices were random without any costs analysis.”

Today, Rony is not only a skilled blacksmith, but “I can say that I am a businessman now, too.”

“Luis has helped me immensely,” Rony shares, “and has inspired me to have better relationships with my employees.” The mentoring has led Rony to mentor his own employees. As a team, they now discuss work-related topics and share about their personal lives and faith. 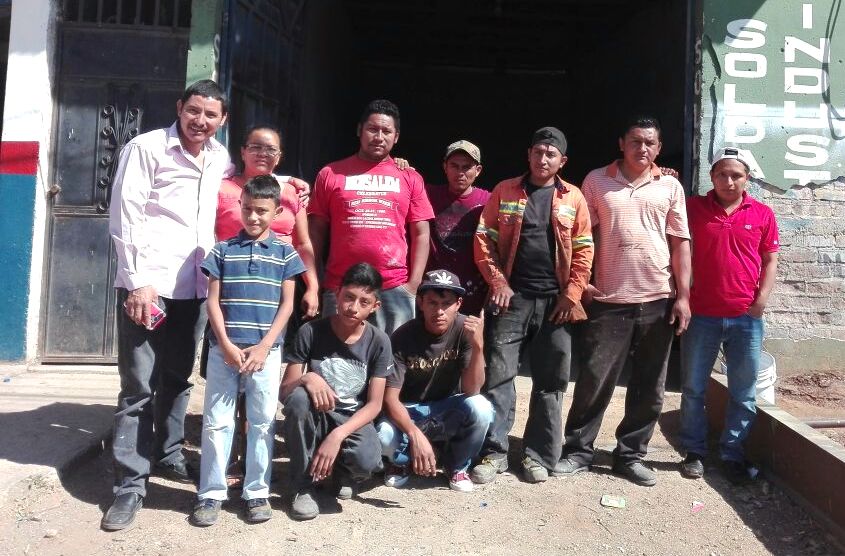 Rony (left) with his employees.

In this way, Rony says “Partners Worldwide has been a pillar for my business.”

Before receiving training and mentoring, Rony’s business was running on passion and technical expertise alone. But today, with business acumen and ongoing mentoring support, his business is on a firm foundation.

Today, Rony’s family is protected from the poverty he grew up in. He and Gladys have four healthy children, and all of them are enrolled in school. Their family continues to be enriched in their faith as well, rooted and growing together in their church.

“My business is having a lot of impact on our community,” Rony shares with pride. “My priority has always been to help others and I believe that is God’s purpose for my business.”

Rony also mentions that his business is the only one like it in his community. “Now our clients do not have to travel five hours to get what they need because we have it! We are helping them save time and reduce their costs.” 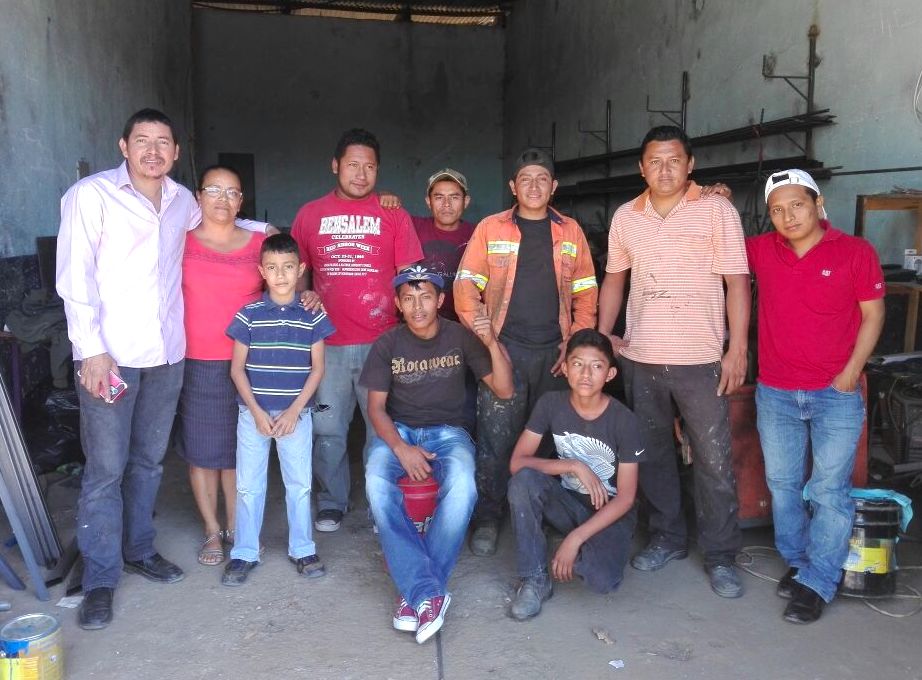 A TESTAMENT TO GOD’S FAITHFULNESS

Rony feels a pang of sadness when he thinks of his 15-year-old self. He recalls the despair that consumed him, the hopelessness he felt when he imagined the bleak future that awaited him.

But in looking back, Rony is also overwhelmed by God’s faithfulness.

God knew the desires of his heart and brought people into his life to encourage and equip him to pursue those desires. Despite being orphaned, Rony has never been alone.

From his wife to his pastor, and his mentor Luis to the business trainers from Partners Worldwide–Rony has been surrounded by love and support. His community has embolden him to pursue his dreams and equipped him to lift himself and his family out of poverty for good.