Ten years ago, you could find Rafael on the streets of San Martín, El Salvador.

Suffering from alcoholism, he spent his days aimlessly wandering, looking for a drink or a place to rest. “I was even on the news when San Martin was highlighted as a city with many alcoholics. They chose me for the picture,” Rafael shares.

One night in 2009, Rafael was told that three men were after him to kill him.

He ran to his family for protection and hid at his sister’s home. Seeing that Rafael was in a desperate place, she encouraged him to come to church with her. And he hasn’t stopped going since.

Through attending church, Rafael developed a relationship with God. He eventually recovered from alcoholism with the help of his pastor and a rehabilitation clinic.

Now that Rafael was sober, he needed a job. So, his pastor connected him with the Sinai Brick Factory, which hired him on as a brick manufacturer. It was his first job in years, so Rafael was eager to get back to work! He worked persistently with faith, love, and dedication.

In 2013, the owner of the brick factory decided to retire and planned to sell the factory. Rafael’s heart leaped. He imagined buying the factory and being able to grow the business. It would be a new and exciting challenge for him.

But when he found out that the owner was asking $5,000 for the factory, his hopes fell. Rafael knew he couldn’t come up with that amount. Still, he wanted to try. So, Rafael asked his friends to lend him what they could. Friends, he remarks, who “would not have lent him anything” just ten years ago.

Rafael came up with $2,000—still short of the $5,000 asking price. However, when the owner heard about Rafael’s keen interest, he accepted the $2,000 for the factory. The business was his!

While owning the factory brought exciting new challenges, it also had unexpected difficulties.

Gangs are commonplace in San Martín, and as a business owner, Rafael now had to negotiate with them directly. The gangs force him to pay an extortion tax of $50 per month, threatening to murder him if he doesn’t.

Still, Rafael’s production has been growing; his factory currently produces 250 bricks per day. His bricks are of such high quality that he is challenged to produce more and more to keep up with demand.

Rafael knew he needed help to meet this growing demand. And he found that help in CREDATEC, a microlending institution and partner of Partners Worldwide.

We walk alongside locally-led institutions like CREDATEC to equip them to serve the entrepreneurs and business owners in their community more effectively.

In the case of CREDATEC, our PW volunteer Business Affiliate team has been actively mentoring their leadership team—supporting them as they work to build a strong institution. CREDATEC’s credit officers and advisors have also attended Partners Worldwide business trainings and seminars.

In fact, one of the credit officers will be traveling all the way to Grand Rapids to attend the Partners Worldwide International Summit this fall!

Through CREDATEC, Rafael received a loan, technical training, and financial advice—allowing him to increase production. 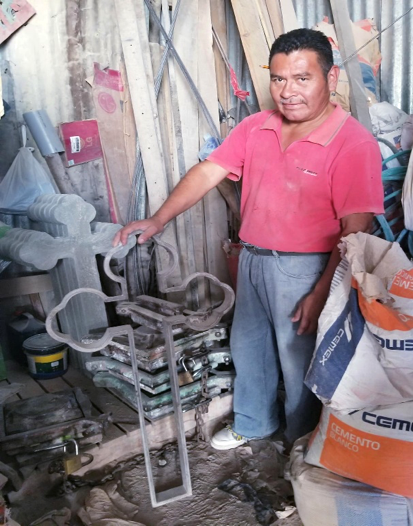 Rafael plans to use the loan he received from CREDATEC to hire one more employee. He is praying that God brings him the right person. Between the high number of gangs in San Martín, and the demographic he is committed to employing, hiring is no easy task.

In the next few months, Partners Worldwide will meet with CREDATEC and clients like Rafael about the gang problem in San Martín. We hope to pray together about the situation and begin a dialogue about feasible solutions and responses.

Rafael shares with pride that his friends and family are impressed to see the person he has become today.

He believes that the key to success is to give back by helping others and to reach out for support from groups like CREDATEC when needed.

Rafael also believes his story is a testament to God’s restorative power. He is humbled by how God restored him physically, mentally, and economically—and is even using him now to restore other’s lives through business.