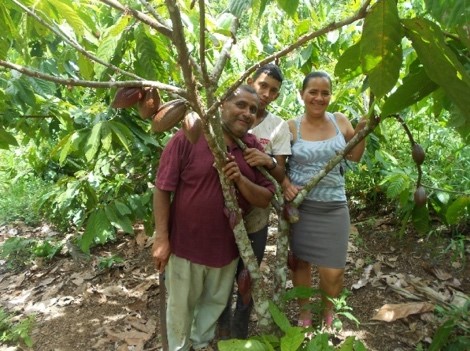 From a young age, Jairo worked in agricultural on his family's land, and because of the country's context in the 1980s, he also learned empirically to perform dental services. Today,  he continues to practice dentistry on occasion, but dedicates himself to the production of cocoa and basic grains as his main sources of income.

Twelve years ago, Jairo bought the farm where he currently lives, and of his own initiative started producing cocoa. However, he soon realized that he needed technical assistance in order to succeed, and approached our partners at the Association for People in Action for their Communities (APAC) in 2014. As a small producer, his results in the past six years have been significant.

When APAC began working with Jairo, the community was only accessible in the summer, which posed challenges in making the necessary connections. But since roads were improved, a greater presence and ability to build relationships has been achieved. Jairo and the other 15 producers affiliated with APAC have been able to access the various financial and business development services provided by the association. Likewise, due to the growth of the cocoa business platform in the area, a collection center has been established, where the cocoa of approximately 30 producers in the community is received, assembled and sold.

Jairo is the leader of the group of producers in his community, and due to his vision of change has invested in a clonal garden to improve the productivity of the plots and the quality of the harvested product. Additionally, in the last two years, he has managed to establish 6 more manzanas of cocoa and continue to improve his living conditions. In three to four years, Jairo could triple the amount of jobs created due to an increase in his production and an increase of production in the zone as PAC outsources collection services to him.

In 2018, Jairo was elected a representative member of the producers of his region before the APAC General Assembly, and as part of his management and participation in this decision-making body, in February of this year, he was also elected as a Member of the Board of Directors for the period 2020 - 2022. His desire is to continue working to generate change in his family and community as they fight poverty together.