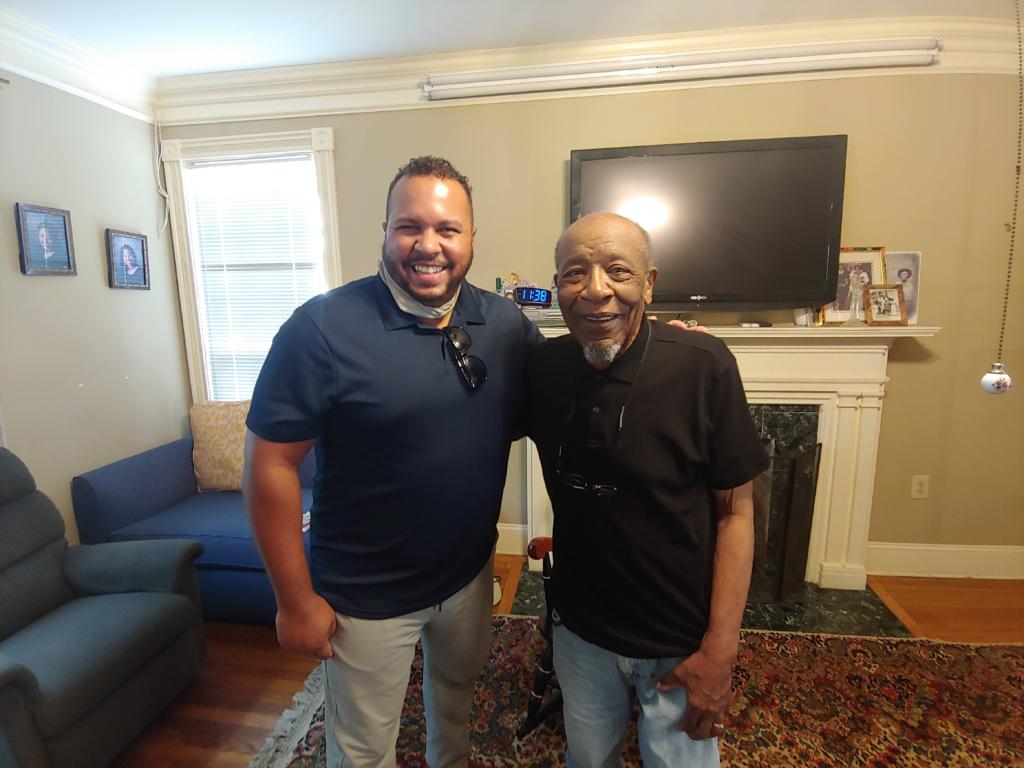 At 91 years old, Dr. John Perkins—Dr. P, as he’s affectionately called—is still vehemently pragmatic. He has the unapologetic candor one would expect from someone his age, along with the fervency of someone much younger. Acutely aware of his failing health, there is a sense of urgency in his words, both written and spoken. He’s writing more books, like his new one, Count It All Joy. The one he had set out on the table when we visited was one from a few years ago—One Blood: Parting Words to the Church on Race and Love. As we sat down together at his home in Jackson, Mississippi—I could tell that “parting words” were weighing heavily on his mind. Along with all of us, he’s watching our nation further tear itself apart through hate and division. Graciously, he invited a small group of us to discuss the work that still needs to be done.

Dr. P grew up in Hebron Mississippi, several hours outside the capital of Jackson. He left the south in the late 1940s, later returning, where he led efforts on school desegregation and voting rights in Simpson County. Like so many others, Perkins’ efforts toward civil rights were met with violence. He had watched his older brother killed by police when was a teenager, and he himself would be beaten and wrongfully jailed for seeking justice and equality. Eventually, Dr. P would launch a national movement, spawning two organizations, the Christian Community Health Fellowship (CCHF) and the Christian Community Development Association (CCDA). These initiatives would end up influencing thousands, garnering further writings, awards, fellowships, and a host of honorary degrees. The John and Vera Mae Perkins Foundation is located in the heart of Jackson and run by his daughters. He and Vera Mae occupy the home right next door.

We sat transfixed as he wove together the themes of love, suffering, race, and economics in a way that felt both meandering and incredibly cogent. These ideas, after all, are intertwined and complex. It’s no wonder that many of us get easily trapped by trying to articulate the emotions of this moment in time. Perhaps it takes someone like John Perkins, who has seen and done so much in his lifetime, to distill these ideas into aphorisms that one can more easily digest. He delivers them with a folksy, southern comfortability that helps you gain clarity the more you reflect upon them.

Among all that he shared, including some piercing indictments of the political sphere, was the simple notion that Jesus was almost a capitalist. Depending on your political leaning, this may feel like a barb. However, Perkins added to this the pithy remark, “and he was a little socialist, too.” But I like the succinctness of the initial phrase, particularly the qualifying nature of the word, almost.

We have no clear evidence that Jesus ever owned a business per se, but we know that he worked as a carpenter. We also know this was not the defining characteristic of his earthly ministry – in fact, it strikes as an inane detail in light of the gospel. That is, unless you ask the question as to why this detail would be mentioned at all. Jesus chose a practical profession like this as a way to serve others through the work of his hands. In other words, he demonstrated love to others through his work—and he surely offered the gift of carpentry to any customer who would want it, regardless of who they were.

Dr. P cited this example as he described his work both as a Bible teacher and as a person who understands business. The idea of business as ministry is actually straightforward: a person or group of people rendering a good or service to others. The implications for the gospel in this way are truly profound. Yet the corruption that exists in the heart of people twists the very nature of this idea. “In the Bible, the process of discipleship is the process of friend making,” says Perkins. “But we have added our own political babble to God’s Word—we have made hate into a virtue.”

If anyone would have reason to hate, it would be John Perkins. As he describes, his brother’s death instilled in him the power of white supremacy. Yet, he credits his grandmother with helping him to recognize his inherent worth as a human being. “A lie is not a lie until you believe it. And in my poverty, I never saw myself as less than them.” Still the economic realities of disparity were clear. He recalls as a young man working long days and making little more than fifteen cents. Today, in his hometown of Jackson, the poverty rate stands at nearly 30 percent. There is a palpable resignation among residents—both black and white—that threatens the notion of hope. The wounds of racism linger, while frustration mounts over perceived neglect around development and infrastructure, both at state and federal levels.

However, these realities aren’t enough to deter Perkins and his family from further venturing into the fray. His legacy permeates even further to other community voices, as the effort to produce jobs and opportunity is bringing together businesspeople, church leaders and others across lines of race. It is, in fact, the very picture of what it means to be one blood and one body. In practicality and in promise, the message is getting through.

“To think that white is superior to black or that black is superior to white – Oh dear Lord, have mercy on us!” Dr. Perkins words penetrate as he vigorously shakes his fists in the air. “We must resolve to love one another, because God is love. How many times do we have to say this?” He prods.