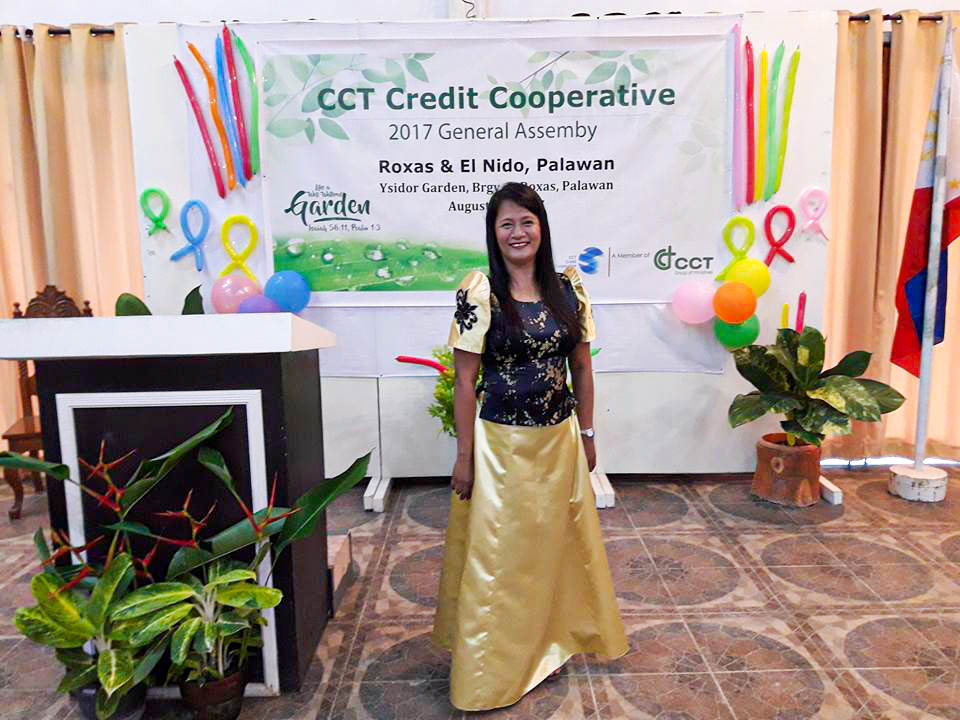 “So do not fear for I am with you; do not be dismayed, for I am your God. I will strengthen you and help you; I will uphold you with my righteous right hand.” Isaiah 41:10

Recently, I had the pleasure of catching up and chatting with one of our Local Community Institution (LCI) leaders, Ate (sister or older sister, term of endearment/respect) Gigie Quintos. Ate Gigie celebrates her 15 years of serving the Lord through our LCI Center for Community Transformation (CCT) Credit Cooperative in the Philippines. To say her journey has been a roller coaster ride would be an understatement. But in all the highs and lows, she looks to God to sustain and strengthen her as she serves.

God Speaks in a Dream

Before she joined CCT and moved to the enchantingly beautiful island of Palawan, Ate Gigie met a friend who told her: "one day you will join me in Palawan." She brushed off the remark of her friend until God spoke to her through a dream. In her dream she was carrying loads of fish in her hand on pristine white sand. Months passed and her friend called her, telling her she had bought her a ticket to visit Palawan. She went and fell in love with the island. Eventually her whole family moved and have made Palawan their home since 2005. A year following that, she found herself called to serve at the Center for Community Transformation, as they were preparing to open a new branch in Palawan.

Leading through the Pandemic

Ate Gigie played many roles as a servant of God at CCT. She started as a Project Assistant and a loan officer – leading fellowship groups, releasing and collecting loans, and managing different loan portfolios for the organization. In 2020, just before COVID-19 officially became a global pandemic, she was promoted and became the Area Shepherd (Area Manager) for the operations of CCT in Palawan. At first, she was hesitant to accept the role, but the Lord gave her confidence. God’s word assured her and she trusted her heavenly father who cares for her to work through her.

At the height of the pandemic, it became clear that CCT had to make some difficult decisions and let go of some of its staff. And this was one of the first things she had to do on her new role – explain the situation to the staff and say goodbye. It weighed her down for days and she prayed for wisdom on how to go about this task. God answered her prayer and some of the staff came to her and expressed how they saw the situation and understood what needed to be done. While it was heartbreaking to see people go, she felt a sense of peace knowing that the relationship with the staff was not severed and that their love for God continues to bind them.

Serving with a Joyful Heart

It is Ate Gigie's confidence in Christ that allows for her to continue serving the Lord with joy and love. She holds on to God’s word in Colossians 3:23-24: "Whatever you do, work at it with all your heart, as working for the Lord, not for human masters, since you know that you will receive an inheritance from the Lord as a reward. It is the Lord Christ you are serving." And even when changes constantly surround her, she remains faithful in her call to serve the Lord joyfully and to love others with God’s love.

It was such a joy listening to Ate Gigie talk about her story and it is evident in her life that God is the source of her strength and her confidence! As of this writing Ate Gigie serves as the Property Development Officer of the CCT Palawan Community Center in Puerto Princesa City and in El Nido. She also provides support to the operations of the CCT Multipurpose Cooperative. A new Area Manager has been appointed in her place, and CCT continues to be a valued member of the Partners Worldwide Network!