Due to severe economic complications and ongoing protests in Sri Lanka, food prices have shot up by 50-60 percent. Medicines are also in short supply and prices have been increased. The cost of cooking gas has increased by 200 percent, petrol, and diesel by 100 percent. These increases have affected almost everything else.

As a result, most Sri Lankans have been forced to cut down on their meals. Meat and eggs are now a luxury for many. Even rice and vegetables are expensive. Families managing with just one or two meals a day, instead of three, are rapidly increasing.

To make matters worse, a further increase in food prices is being predicted due to the continuing economic crisis which has still not been resolved. Most economists predict a rapid worsening of conditions for the next three to six months and even with better policies in place, they predict that the country would take around two years to regain some normalcy. Predictions regarding the food security crisis are becoming far worse, with a potential starvation crisis on the radar.

In this time of gloom and hopelessness, there are still some glimpses of hope. Here is one such example.

Shakthivelu is a hardworking farmer who has been able to step out of poverty despite the worsening country situation. Shakthivelu is responsible for providing for a large family totaling 15 people, including an adult daughter who became paralyzed after an illness. As a result, even after reaching retirement age, Shaktivelu was forced to continue working for a cleaning service company as a gardener simply to make ends meet while having a dairy farm at home. 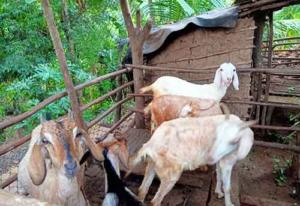 When our implementing partner Jennifer from Joseph’s Foundation (JF) went to visit Shakthivelu’s family in 2021, she noted that even though Shaktivelu already had 4 cows and over 20 goats, there was no proper shed to secure the animals. As a result, the major challenge facing Shaktivelu was his inability to protect his livestock from being exposed to bad weather as well as from local thieves who would steal the unsecured animals.

With the help of a donor, Joseph’s Foundation funded Shaktivelu to build a proper shed to secure his animals and also provided management guidance to run his farm as well as develop it. JF also funded some exercise bars for his daughter. 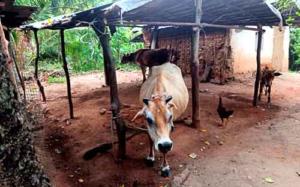 Soon after, the local Agriculture Development Officers visited his farm, saw the improvements made, and donated a cow, which happened to be pregnant! As a result, the farm has grown rapidly, and the goats are also multiplying and being protected from thieves!

There are several positive outcomes already. Despite our implementing partner not being able to visit Shaktivelu for the last two months due to the severe diesel and petrol shortage, she has been able to constantly communicate via the phone to receive updates.

GROWING HOPE
Joseph's Foundation plans to support Shaktivelu further by providing funding for a good concrete floor for the animal shed combined with a storage silo for the animal wastes which can then be used effectively for fertilizer as well as biogas. Another step planned is to provide guidance to print sacks with a brand name to sell fertilizer. JF has also identified the need to provide expertise on ways to make cow dung powder and cakes to promote and sell online for organic agriculture.

We are able to see glimpses of hope and transformation in a poor family stepping out of despair into life. All this is a result of an investment of just $200 combined with a lot of commitment, empathy, and practical advice from our implementing partner. It is the Spirit of God that allows us to see the potential for success even in the midst of hopelessness and despair. It is the Grace of God that empowers us to be catalysts for hope in the midst of the darkness.

You can join our work in Sri Lanka and around the world by making a donation here or volunteering to offer business expertise to entrepreneurs here.