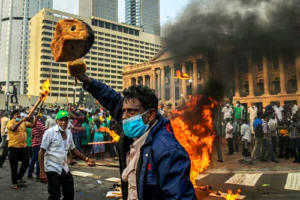 Sri Lanka is in crisis.

Fuel and gas shortages, unpredictable 10-13 hour power cuts, drastic price increases on basic necessities, medical shortages resulting and canceled procedures and delayed care, and rising unemployment have created extreme instability and made life unbearable for many. These circumstances are especially impacting the elderly, babies and nursing mothers, those with health conditions, small businesses, and people already in poverty. People are dying from heat, exhaustion, and hunger while standing for hours in queues for gas and fuel—some parents reach the desperate point of suicide when they are unable to provide for their children.

Since March 31st, youth from across the island have spearheaded protests opposing the current governmental leadership, fueled by an inability to see hope for their futures without drastic change. The response has added more strain to an already fragile situation–a three-day curfew, a week-long state of emergency, and a wave of counter-protests threatening violence. 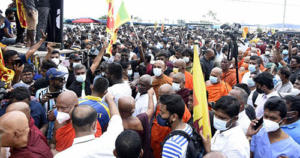 In early 2022 The Sri Lankan economy was just beginning to recover from the fallout of the 2019 Easter Attack and the COVID-19 Pandemic, with increasing tourist arrivals and businesses functioning at some level. There was some hope.

However, economic mismanagement and systemic corruption over the last 2 years have triggered a crisis. This has adversely affected most businesses as well as all consumers. The depreciation of the rupee and high inflation make daily living very difficult for the rural poor and now the middle class as well who are struggling to survive. Many businesses are affected as they are simply unable to function.

Recently the government installed a new Governor for the Central bank who immediately made certain policy decisions which would help in the long term. However, projections indicate that this crisis will only get worse before it gets better. A major prediction is that the rupee will depreciate even more, making the cost of imports even higher. Further, fuel and energy shortages will persist, triggering multiple fallouts for families and every type of business. And perhaps worst of all, a food shortage is also predicted.

One reason for the predicted food shortage is the shortsighted overnight shift to organic agriculture in 2021 without a proper plan which resulted in a 25-50% drop in harvests and output. The policy has now been reversed, but the shortage of fertilizer and other required inputs still persists. Another reason is the lack of funds for imports since much of our food–including rice, wheat, and milk power–is still. The Speaker of Parliament who is a member of the ruling party said recently, ‘The Food, Gas, and Electricity shortages will get worse. There will be very acute food shortages and starvation.”

With 11.7 percent of the population (around 2.4 million people) living on less than $3.20 per day in 2020 and now the Central Bank projecting another one million middle-class families (around three to five million people) affected by this recession, the challenge is huge.

Already there are cases being reported of many people forced to eat only one meal a day, just a step away from starvation. Already malnutrition is increasing among children resulting in various complications.

What can Partners Worldwide do?

The immediate need is for relief. This includes dry rations and medical supplies. Many of the micro-entrepreneurs supported through our network are themselves facing cash flow issues and struggling to put food on the table for their families. This includes some of the church planters and war widows we helped to launch businesses. We are working to provide support to our partners as we are able.

For a more sustainable impact, our first priority will be to work to address the food security challenge. Developing home gardens and introducing innovative and effective agriculture practices at both home garden and industry level will result in both survivals and creating some business opportunities through barter, value addition, and maybe even exports at a later stage. Several of our partners have already been piloting home garden projects. This is an area in which we will look for collaboration, experts, and other resources including funding.

Another area is supporting the local churches in our network as they are beacons of light and hope during this dark time. Already a few churches have invested in generators and opened their facility for people to use as remote workspace. They have also created space for nursing mothers who are unable to cope with the sweltering heat at home without electricity. Some churches are preparing hot meals and serving their community.

Especially in times of crisis, Partners Worldwide is committed to a faithful presence with those facing poverty and economic instability. You can join our work in Sri Lanka and around the world by making a donation here or volunteering to offer business expertise to entrepreneurs here.