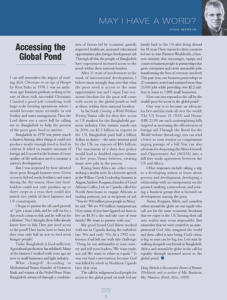 Dear Reader: The article in this blog was written by Doug Seebeck in 2009. It’s amazing how Doug’s observations then are so true for today. We are grateful for the permission from Prism Magazine, a publication by Christians for Social Action to republish. Doug has provided some afterthoughts at the end of this article.

I can still remember the impact of reading Rich Christians in an Age of Hunger by Ron Sider in 1978. I was an ambitious agri-business graduate seeking to be one of those rich, successful Christians. I landed a good job consulting with large-scale farming operations where I would become more scientific in soil fertility and water management. Then the Lord threw me a curve ball by calling me to Bangladesh to help the poorest of the poor grow food to survive.

Bangladesh in 1978 was pretty much a disaster. Among other things, it could not produce nearly enough food to feed its citizens. It relied on massive amounts of foreign aid. It scored at the bottom of every quality-of-life indicator used to measure a nation’s development.

But I was surprised by how talented these poor Bengali farmers were. Given access to hybrid seeds, fertilizer, and water during the dry season, these tiny landholders could not only produce up to three crops in a year, they could also match rice yields of their Japanese and US counterparts.

Today Bangladesh is food sufficient. Agricultural production has stabilized. Many of the farmers I worked with years ago are now in small businesses and light industry.

What changed? According to Muhammad Yunus, founder of Grameen Bank and winner of the Nobel Peace Prize, Bangladesh advanced through a combination of factors led by economic growth, improved healthcare, increased educational opportunities, plus foreign development aid. Through all this, the people of Bangladesh have experienced increased access to the pond within their national borders.

After 31 years of involvement in the work of international development, I believe more strongly than ever that what the poor need is access to the same opportunities you and I enjoy. True economic freedom for the poor will come with access to the global ponds as well as those within their national borders.

In his book Creating a World Without Poverty, Yunus calls for duty-free access to US markets for the Bangladeshi garment industry. One statistic stands out: In 2006, on $3.3 billion in exports to the US, Bangladesh paid half a billion dollars in duties—the same amount paid by the UK on exports of $54 billion. The enactment of a duty-free policy would lead to doubled exports volume in five years, Yunus believes, creating many new jobs in the process.

Rising from Africa are other voices striking a similar note. In a keynote speech at the Willow Creek Leadership Summit in August, Andrew Rugasira, founder of Good African Coffee, Ltd. in Uganda, called for North Americans to engage Africans as trading partners, not as recipients of aid. “You see 900 million poor people in Africa,” he said. “We see 900 million entrepreneurs. How many of you have figured out how to live on $1.50 a day and take care of your family? We want to partner with you.”

My good friend Gad Bilete worked with me in Uganda during the turbulent late ’80s and early ’90s. At a 1992 conference, Gad left me with this challenge: “Doug, be our ambassador to your country and tell your leaders, ‘We want trade, not aid. We want to relate as equals.’” It was our final conversation, because Gad was killed by rebels in Northern Uganda later that year.

The calls by indigenous local leaders for access to the global pond via trade led my family back to the US after living abroad for 18 years. Their visions for their countries led me to start Partners Worldwide, a business ministry that encourages, equips, and connects businesspeople in partnerships that grow enterprises and create sustainable jobs, transforming the lives of everyone involved. This past year, our business partnerships in 20 countries created and sustained more than 23,000 jobs while providing over $2.2 million in loans to 1,885 small businesses.

How can you respond to the call by the world’s poor for access to the global pond?

One way is to become an advocate for free and fair trade all over the world. The US Senate (S 1524) and House (HR 2139) are each contemplating bills targeted at increasing the effectiveness of foreign aid. Through the Bread for the World website (bread.org), you can send a letter to your senator or congressman urging passage of a bill. You can also advocate for deepening the Africa Growth and Opportunity Act (AGOA) into a full free-trade agreement between the US and Africa.

Other responses include taking a trip to a developing nation to learn about poverty and development, developing a relationship with an entrepreneur on the ground, making a microloan, and joining a business group that is focused on development among the poor.

Yunus, Rugasira, Bilete, and countless others around the globe are our equals who call out for the same economic freedoms that we enjoy in the US. Turning their call into reality may seem impossible. But remember that we were created by an entrepreneurial God who imagined the world and then called it into being. God’s vision is big, so ours can be big, too. Let’s start by walking alongside our friends in Bangladesh, Africa, and around the globe in the call for equality through increased access to the global pond.

It’s good to look back to see clearly ahead. Today, Bangladesh (a country the approximate size of Wisconsin) is the world’s third-largest rice producer and is a rice exporter. It is Bangladesh who is supplying Sri Lanka with rice presently amid their current economic meltdown and hunger crisis. Bangladesh garment exports to the US have in fact grown to $8.6 billion, since 2006, and is now South Asia’s second-largest economy, and an increasingly important partner of the US in the larger Asia region. US exports to Bangladesh have also increased.

Similarly, the Africa Growth Opportunity Act (AGOA) has been extended to 2025, and now involves 38 countries in Sub-Saharan Africa. It has undeniably bolstered economic growth, promoted economic and political reform, and improved our relations in the region.

None of this should be surprising as it’s a truth from the Bible to "love your neighbor as yourself”, and everyone is better as result.

There is much more to do in this particular moment of time: transform old systems, structures, and alliances, so that the flow of goods and services can increase. Access to the global pond is as critical today as it has ever been. And with the rapid innovation and growth in e-commerce, for the first time in the history of humankind, any entrepreneur anywhere in the world, can sell their products, goods and services to everyone, everywhere in our beautiful world. Don’t stop believing now, we are winning the war on poverty.

The future has never been brighter!