In the past few weeks, I have connected with several founding partners of our organization in the USA. And as I prepare to leave for my last trip to Southeast Asia as CEO, I'll see friends and partners in Indonesia, Singapore, and the Philippines. While there, I'll also be with some of our first founders in that region.

I have always objected to the term “founder” as if there is one founder of anything.  It is such a US ethnocentric, individualist approach.  And as the world knows, it is uniquely American, part of our so-called “American Dream.”

There is only one true Founder, the Creator of the universe, our beautiful Earth, and all of humanity. And yet, God isn’t alone either; “Let us create humankind in our image, male and female He created them”.  The perfect community of love—God the Father, Son and Holy Spirit, and women and men bring this creation and people to its God-given potential.

The same is true of Partners Worldwide.

The late theologian Frederick Buechner so eloquently said: “Your vocation in life is where your greatest joy meets the world’s greatest need.”  This is the first core value of Partners Worldwide—Embrace God’s Calling!

Before Partners Worldwide was even a seed of an idea, I met some of my future PW co-founding partners while still living and working in Africa.  They were US entrepreneurs—women and men who had started their own businesses simply to support their families. But over time—with God’s blessing and their faithfulness in doing business God’s way—their businesses had grown beyond their wildest dreams.

These well-resourced Christians were coming to see the impact of their financial investments in community development programs through World Renew (then called CRWRC) in Kenya.  When visiting micro-entrepreneurs in an informal settlement on the outskirts of Nairobi, their hearts were broken by what they saw.

And yet, they also witnessed the impact of the World Renew efforts. Along with that, they also saw the enormous challenge; “How do our local church and parachurch partners sustain their great work without a continual infusion of capital from the Western world?”.

Right there, God was already inspiring the dream for Partners Worldwide. God was inspiring these entrepreneurs (and me) to ask: “What more can we do than simply write checks?”.

And that is where it all came together. Business as a calling and work, worship, and service are as one (just as the Hebrew principle of Avodah advocated long ago)! Creating partnerships with a specific focus on business (entrepreneurship and sustainable job creation)—because a good job changes everything!

I still remember the honest feelings and open plea as we stood in the hot sun, with the stark contrast of open sewage and water running beneath our feet, and the raw beauty and rich love of my Kenyan friends welcoming my new US friends as their own.

It was right there when my co-founder John Vander Ploeg spoke from his heart; “Here’s the thing Doug. In the church’s eyes, you are on the top of the ladder because you are a missionary. Pastors come next, then social workers, nurses, doctors”, as his hand was going down this imaginary ladder.  “But businesspeople aren’t even in the hierarchy. “

FOUR MORE YEARS, THE BIRTH OF PW, AND A PAINFUL MOVE.

It took four years which included visits to other countries in eastern and southern Africa and some pilot projects in Kenya. The founding group asked if I would return home to the US and become the CEO of a new organization—Partners for Christian Development.  I told my wife and best friend, Gail, “if we are serious about our life pledge to end poverty for good, we have to do this”. But for all our children, the only home they knew was Africa! It was one of the most painful things we have ever done as a family. 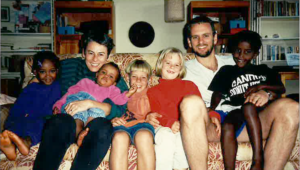 But as always, God exceeds all our expectations in blessing our dream together:  A worldwide movement of businesspeople who share their faith and love in Jesus Christ, so that rich and poor, individuals and groups, communities and nations, are transformed to reflect the Kingdom of God.

From those founders, we went back and formed the first business to business partnership in Nairobi; the Kenya Investment Trust, in 1997. New local partnerships were formed, our mission expanded, and in 2004, we re-named the organization Partners Worldwide. 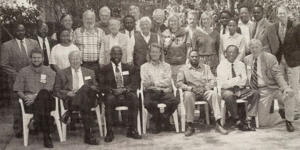 Founding partners find more partners, just as God finds us, and from that first ragtag-looking group of businesspeople from the US and Kenya, partners have been finding more partners all over the world, and now we are at 181,923 businesses strong and counting!

As I pack for this final international trip to SE Asia, I think of all the founding partners in the Philippines.  Partners who have inspired so many others that are now growing in Indonesia, Singapore, Myanmar, and beyond!

I have traveled the world over the past seven months and am so awe-struck at what I see and know to be true. That business is a calling, and that businesspeople can redeem God’s dream for His love and flourishing so that may have life and have it abundantly.

That is why I am so excited about our audacious God-inspired goal for Vista 2030: 1 million redemptive business ambassadors of Christ; 3 million great jobs sustained; 15 million joyful, smiling family faces now reflecting more fully their Creator!

From our founding partners to our newest partners being found, we are uniting to co-create and breathe life into the Vista 2030 road map made by our global network. A road map to reach and prayerfully exceed our goals.  And if you haven’t already joined in to support us, do it now!  We need you!